If you’re out there looking for something healthy, mouthwatering and vegan with the ability to inoculate thy system with wholesome nutrition, healthy crunch and that which is choke full of so much goodness that you’d almost feel sick with health, except you won’t because healthy food makes no one sick and it’s time we embraced that fact, then this is the dish for you.

Also, as rare as it might be, often times nourishing food turns out to be just that much better than almost all the bad stuff that tastes divinely delicious, and this vegan wrap is the alpha and the omega of health and taste; alive here to work as a fantastic breakfast, packed lunch, picnic food or just a regular meal for a regular night, except it’s so damn tasty that it makes a very ordinary day into a stellar one, or at least till the time you’re eating this.

What’s more this recipe actually has two recipes, so that’s like a bonus, and one can’t have enough bonuses..so here we go. 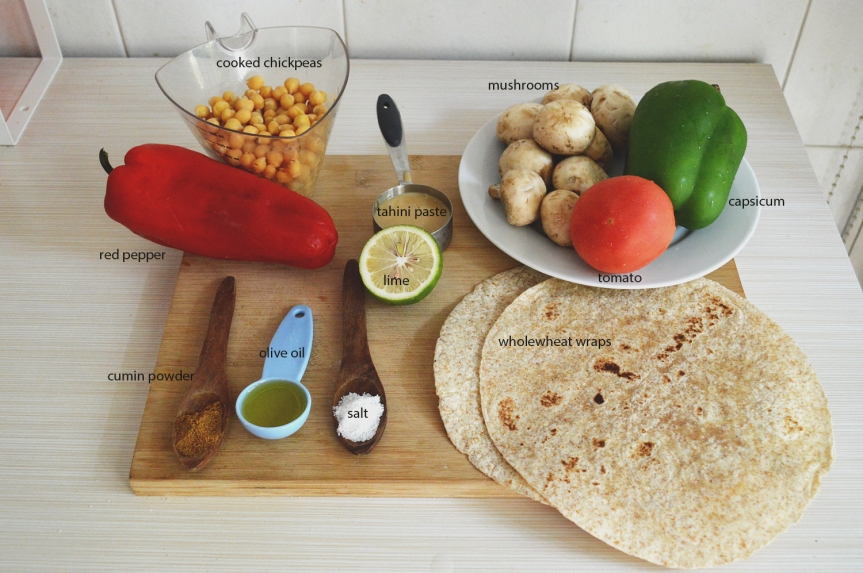 These might look like a lot of usual suspects, but that’s only because we’re going to be making hummus from scratch, and not just any ol’ hummus but a roasted red pepper one, and here’s a recipe for a regular hummus and there’s a detailed ‘how to‘ on roasting red peppers as well, which you can find here.

A bit of roasting action first, ensuring the pepper is nicely charred and softened

after which we put it in a bowl because it needs to cool down and become easier to peel.

cover securely to trap in the heat, that helps create moisture and loosen the skin and make it all sorts of juicy for at least 10-15 minutes 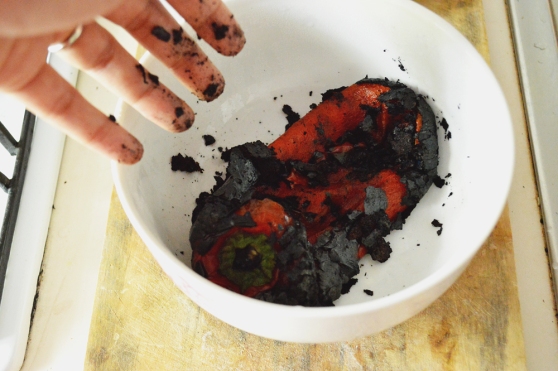 After which time you can easily peel off the skin, not too fastidiously though

a few charred bits still sticking to the skin only help impart a more smoky flavour to the hummus. 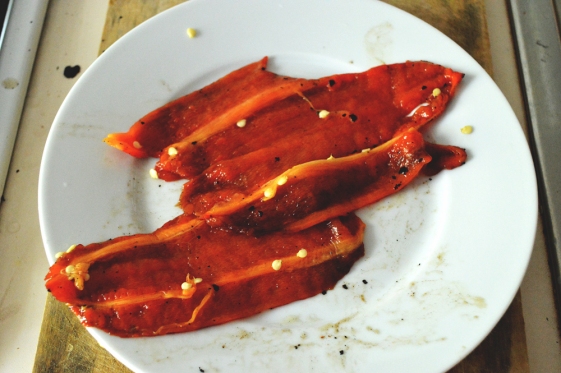 get rid of the seeds and guts until only the juicy part of the skin remains. 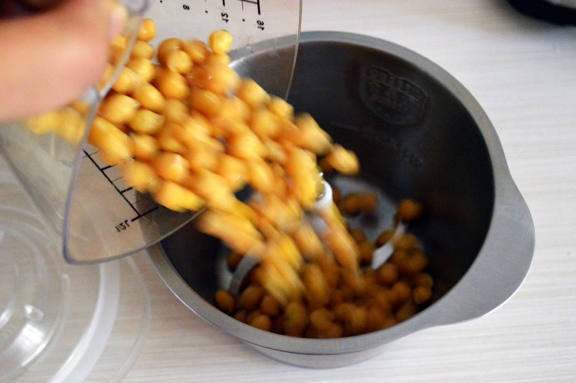 Now with the hummus. In a blender, or processor tip in the cooked chickpeas. 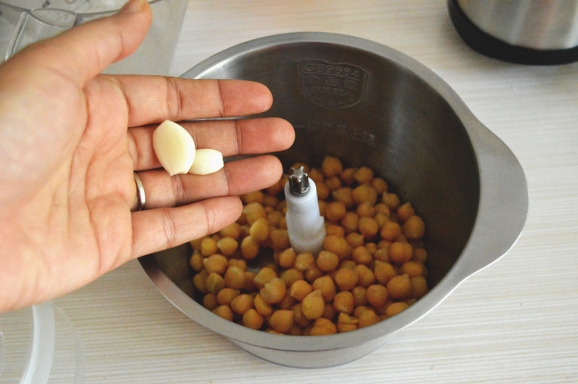 and a couple cloves of garlic. I forgot to put them in the ingredients picture.

add in the roasted red pepper 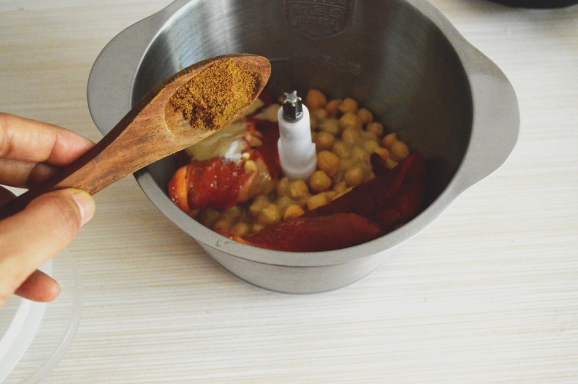 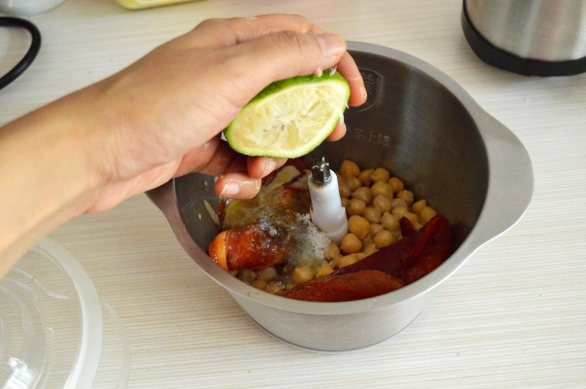 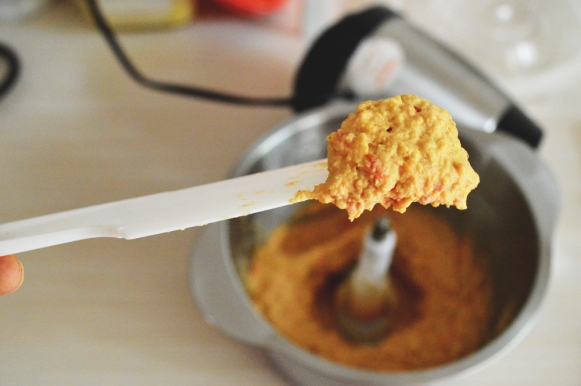 something like this, or finer if you please. It should be easy to spread.

here we have our veggies chopped. A bunch of mushrooms, half a tomato, half a capsicum and our lovely onion of course.

cook onions and capsicum on a smoking hot pan with a bit of oil.

I like using tongs for this particular step, because it’s easy and makes you look very efficient.

once it begins to soften a bit, add a small pinch of salt.

and keep cooking on high heat until it’s sweetly caramelized.

remove veggies on a separate plate

and in with the mushrooms. There’s a rogue capsicum in there was well.

all needs remain is a bit of assembly work. 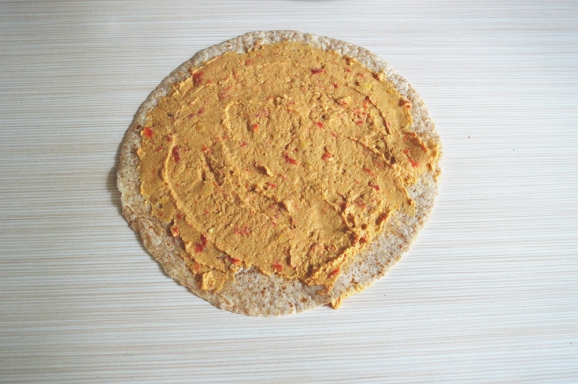 Drape the wrap with vulgar amounts of hummus. Don’t be stingy with this spread. It’s delicious, it’s full of proteins and it’s the flavour base to our wrap.

Begin by layering on 1/3rd part of the wrap so it’s easy to roll. First with the caramelized capsicum and onions.

and finally the tomatoes. 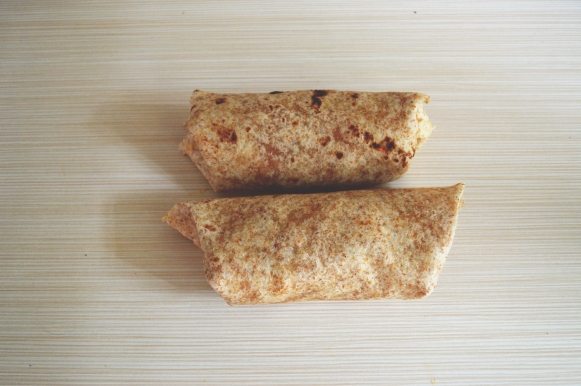 serve am as is, or if you feel fancy then add some gorgeous crispy baked potatoes on the side.

Roast red pepper on high flame, until all sides are charred and blackened. Cover and let rest for 10-15 minutes for the skin to loosen, after which gently peel away the charred skin and remove seeds.

Add all the hummus ingredients with the roasted red pepper in a blender or food processor and pulse until a thick paste is formed.

Heat oil on high flame until smoking and add the sliced capsicum and onions with a pinch of salt until sweetly caramelized. Keep tossing to keep from burning.

Remove to a plate once cooked, and in the same pan add in sliced mushrooms and cook until browned and soft.

To form the wraps, spread hummus generously on whole wheat wrap and begin layering the vegetables on 1/3rd side without heaping on too high so as to enable easy rolling of the wrap.

One thought on “Vegan wraps”

Such redundant ways of superficial living! We highly disapprove and also don’t care enough.
A close up to end the magic of mystery
Silent it goes with its beacon on high alert for any signs of leftover energy after massively destructive wars of nebulae successions.
When you’re cold, cozy and cute.
Between space and slow progress life begins to unfurl in knots
Weaving minuscule threads through loops of a conscious distress locator.